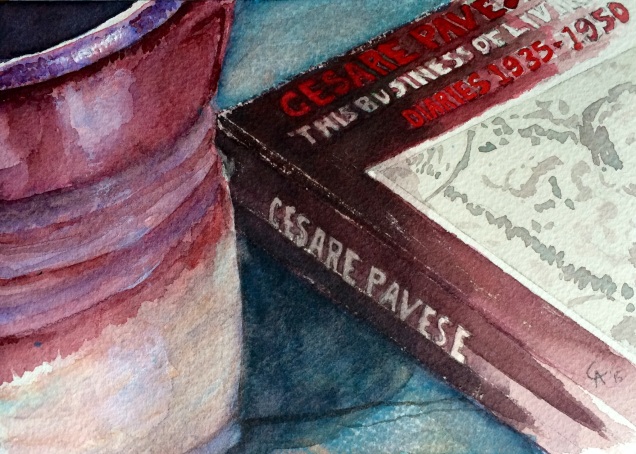 There comes a time when we take into account the fact that everything we do will become a memory in due course. That is maturity. To reach it, you must have memories.

I’m closing out this Pavese watercolor sketch with two quotes from his diary that sum up his writing pretty well. The latter point especially is one that resonates with me, as it informed my writing style (if you’re curious, you can see it here).

To finish this sketch, I researched some Wyeth watercolors to help figure out the table color (Cerulean blue, cobalt teal blue, ivory black, cobalt blue over a mix of a light, bland reddish brown). This seems to bring out some extra interest in the arrangement and feels suitable for Pavese’s melancholy brilliance. After laying in the base of cerulean and cobalt teal I sanded it down to make it look more aged, then painted the shadow. I also scraped out the edges of the book where the cover was wearing out.

I’m wondering if I should exagerate some white highlights for more interest, but I will leave it as it for now. This is a very small work–5×7–and I’ve probably overworked it enough already.

And by an odd coincidence, Pantone’s color if the year is Marsala, which is strikingly similar to the dominant color in this sketch. How trendy. 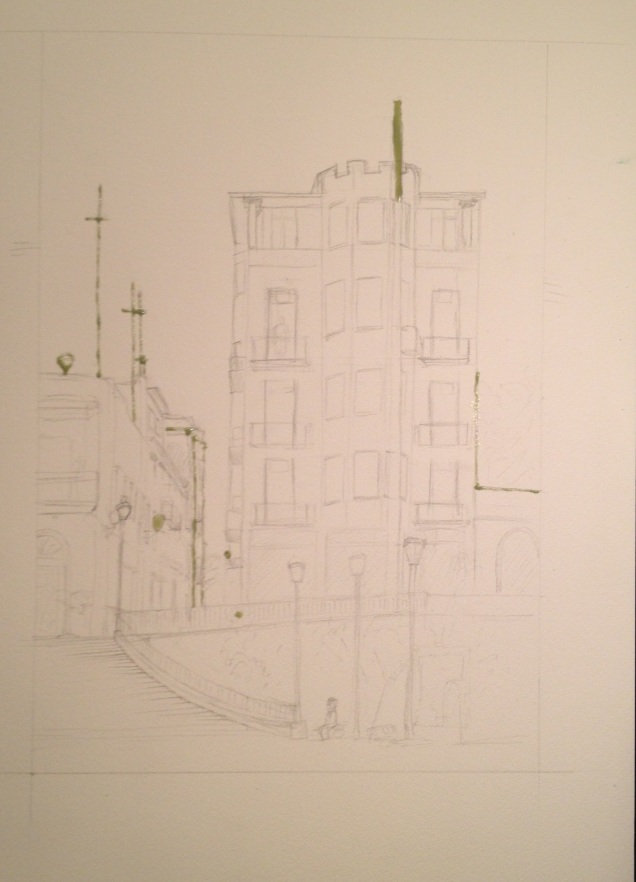 After a brief hiatus for Father’s Day and some work that carried on through the evenings, I am getting back into this painting of Old San Juan. Though it’s only been a week, I had to spend time reacquainting myself with the subject, so I focused on the drawing again. I cleaned up the left side and drew in more of the details, then masked some of the areas I want to focus on later.

I am finally ready to start painting, which I won’t get to tonight. I am still wondering what to do in the bottom left corner. The two figures in the photo are actually me and my older daughter, and our presence doesn’t quite fit the mood I want to convey. I will have to put some different figures in, I think. I will make that decision once I start painting. I don’t want to overdraw, and if I don’t move on, I will.

In thinking about that decision, I have been thinking about Pavese, and how well he sets a scene. I will quote one of my favorite beginnings to a novel. Here is the first paragraph of Pavese’s Among Women Only.

I arrived in Turin with the last of the January snow, like a street acrobat or a candy seller. I remembered it was carnival time when I saw the booths and the bright points of acetylene lamps under the porticoes, but it was not dark yet and I walked from the station to the hotel, peering out from under the arches and over the heads of the people. The sharp air was biting my legs and, tired as I was, I huddled in my fur and loitered in front of the shop windows, letting people bump into me. I thought how the days were getting longer, that before long a bit of sun would loosen the frozen muck and open up the spring.

In such a short space Pavese lays out the narrator’s character, the city, and the mood, not just in the present scene, but also for those to come. Look at the last sentence: “loosen the frozen muck and open up the spring.” This is typical Pavese. At first blush, this appears hopeful–the coming spring–but a spring of loosened muck is as foreboding as it is promising. Sure enough, within the first few pages, a failed suicide is revealed, and the narrator gets caught up in the sad affairs of a group of rich women.

This is the trick that I one day hope to accomplish in a painting–all of the details coming together to convey the depth and complexity of mood in a space and the lives that occupy it.