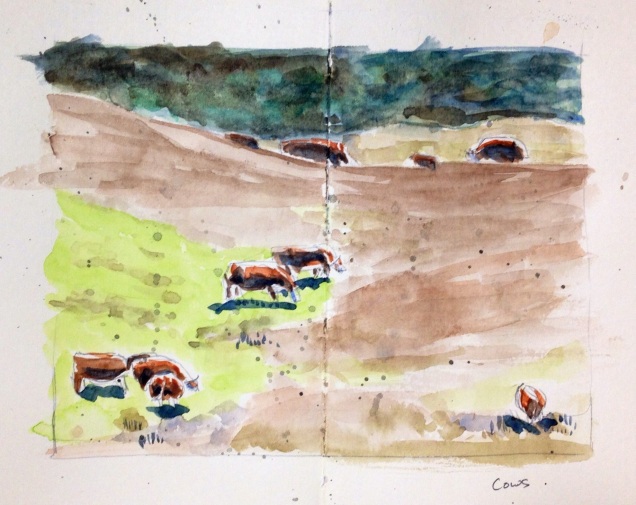 I have a Moleskine sketchbook that I haven’t used much, but I’ve liked Wil Freeborn’s watercolors in his, so I thought I’d give mine a try again with this preliminary sketch for another painting for my California series. I am going to make a concerted effort to sketch Tysons this year, and the peculiar characteristics of the Moleskine Sketchbook paper could prove useful. Two for one here, working out a composition and getting practice with this paper and my compact kit for watercolor sketching.

I was kicking around a few different ways of dealing with this scene. My reference photo was expansive and somewhat standard, as taking photos from the passenger seat of a car would tend to be, but there were interesting possibilities when cropped. This was a crop ignoring the expansiveness of the view and focusing on this utility pole. I tried some colored pencil scraped on in the foreground over some different diluted dabs of color to get the grassy texture. It seems to have worked out ok. More to play with I think, but I got a few good things out of this. 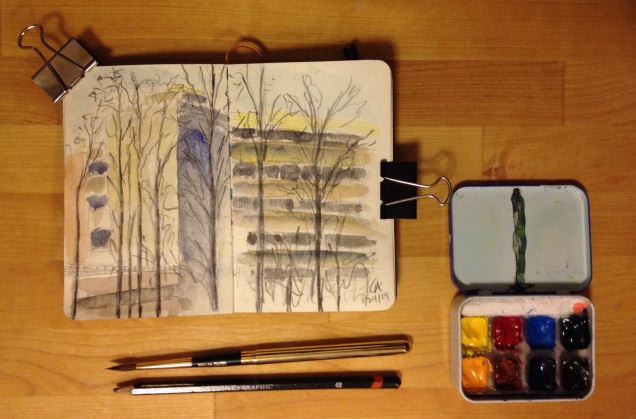 I have a nice view from my office building in Tysons Corner: more office buildings. I’ve sketched the view out the window a few times, but here’s another try from today during my lunch break. The light was kid of interesting, and I embellished it a little. I was also interested in the tall trees obstructing the view. I made them a little more pronounced.

I was also excited to try out my new Isabey red sable pocket round. I plan to do a lot more sketching around work–Tysons is undergoing a big transformation, so once I can go outside again, there should be some good sketching opportunities–and I want to get my compact set up in order (shown above). It was a nice experiment today. Much better using a real brush then the waterbrushes I had been using for this sort of work.

Looking forward to plein air season, I wanted to work on a single session 11×14 painting to start getting used to working quickly and not worrying too much. This one took about two hours based on our drive up and down route 1 a couple years ago. We were coming back from Monterey when I saw this. The road was narrow all the way, so pull-offs like this were common, though in this case it was private.

While there I was reading Kerouac’s Big Sur in which he talked about the remains of old Hudson’s crashed on the beach. Certainly made us drive carefully.

On a related note, I recently found the wikipaintings app, which is an incredible library of paintings to study, and you can zoom in very close on them as well to get a good sense of technique. I’d highly recommend it. It’s a nice learning tool to have. I was studying some Hopper closely this evening. I think that came out a little here. 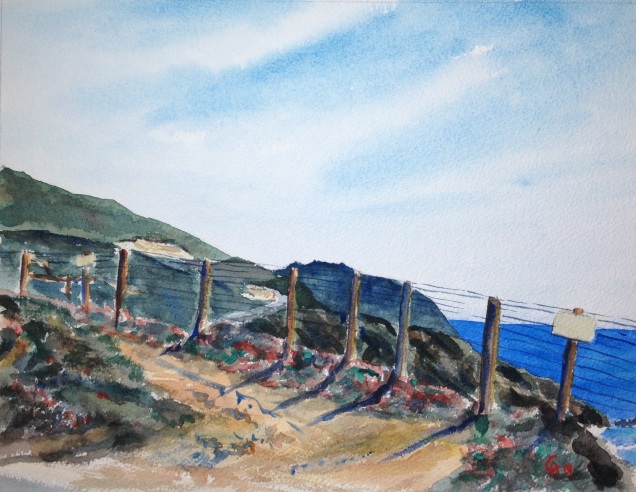 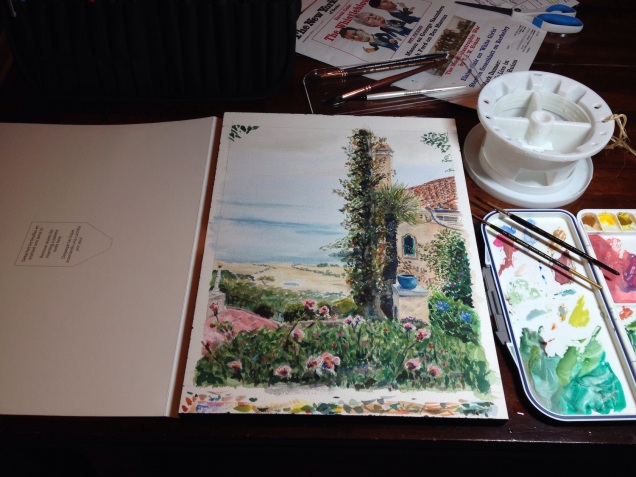 Don’t worry about your originality. You could not get rid of it even if you wanted to. It will stick to you and show you up for better or for worse in spite of all you or anyone else can do.
– Robert Henri from The Art Spirit

I used to be a big Radiohead fan. I recall when Kid A came out the band talked about how they just wanted to make an album like Aphex Twin, an electronic artist I wasn’t into, and the result was Kid A. Listening to then side by side I guess you can see some influence, but Aphex Twin would never have made Kid A. That was a distinctly Radiohead album. They had a true enough sense of themselves that even if they tried to mimic they never lost the underlying Radiohead-ness. And that Radiohead-ness resonated with the fans to the point that it became part of them as well.

When I was writing, I dealt with the same thing. I just wanted to write a book like Calvino at one time, then it was just wanting to write like Cesare Pavese and Alberto Moravia. Both of my novels, despite being different in subject, style, and influence are I think/hope still very much mine (how good they are is another matter). Thinking of Elvis Costello’s homage to Stax Records–Get Happy–that is still very much an Elvis Costello album, to work “after” someone else is not to mimic but to understand what that artist means to me.

Here I am now just trying to make a Sargent painting. Of course it’s a lot more that that, or at least different, and I have failed at that false goal anyway. I had other things in mind, my own way of seeing, my own developing abilities/limits, everything else that went into this, including my influences. To bring Robert Henri back into it:

All the past up to a moment ago is your legacy. You have a right to it. The works of ancient masters, those of the student next to you, the remark let drop a moment ago, all is experience.

I think this painting came out pretty well as mine. But that’s only part of it. What does the work say? What does it do? Does it have that animating element to make it not just mine, but the viewer’s as well? Does it resonate? That’s always the challenge, and maybe the thing that matters above all. Art is conversation as much as expression.

I finally got into working with the opaque mixtures tonight on the main tree. It’s looking pretty good, but perhaps a little more needs to be done to get at the impression I had in mind. I am new to using opaque with the transparent, so I won’t know for sure until I get the foreground finished with the large flowers. For those I intend to use impasto techniques to really make them pop out–I am thinking of the gondoliers in Sargent’s Bridge of Sighs painting. I like how this is shaping up. A good experiment so far, and I think in the same family still as my elephant seals painting. 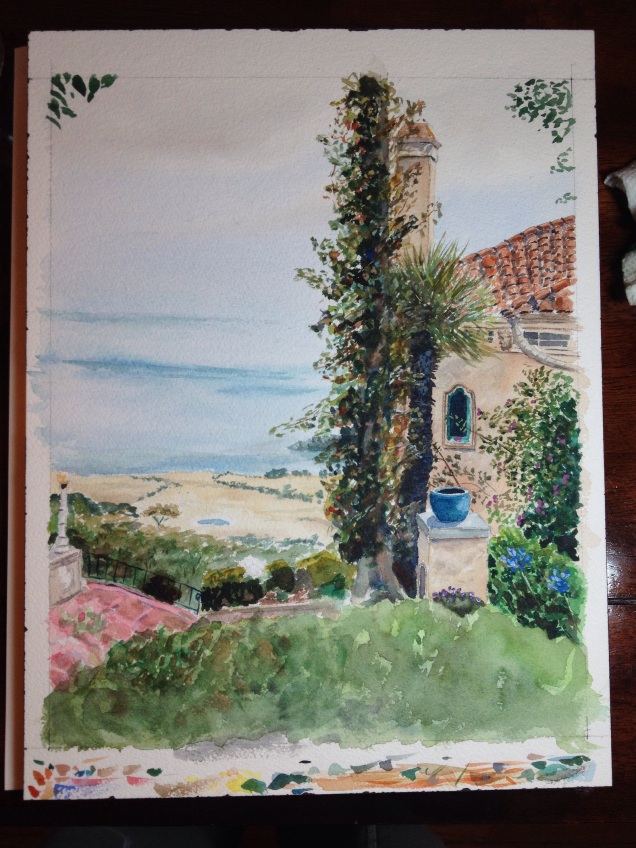 I found some nice short lectures from the MFA in Boston on YouTube about John Singer Sargent’s Pomegranates and Gourds paintings, and the influence of “decoration.” He was working on a large mural at this time, and these paintings may have been in part a study in filling space without a clear focal point. On the gourds especially he uses a lot of opaque, and it’s very abstract. I started to try that out here with the flowers on the bushes in preparation for a lot more in the foreground and up the tree. Here’s where things stand tonight. It’s coming along roughly as I’d like it too, but the real fun is still to come. This will be good preparation for some plein air techniques once the weather gets better. 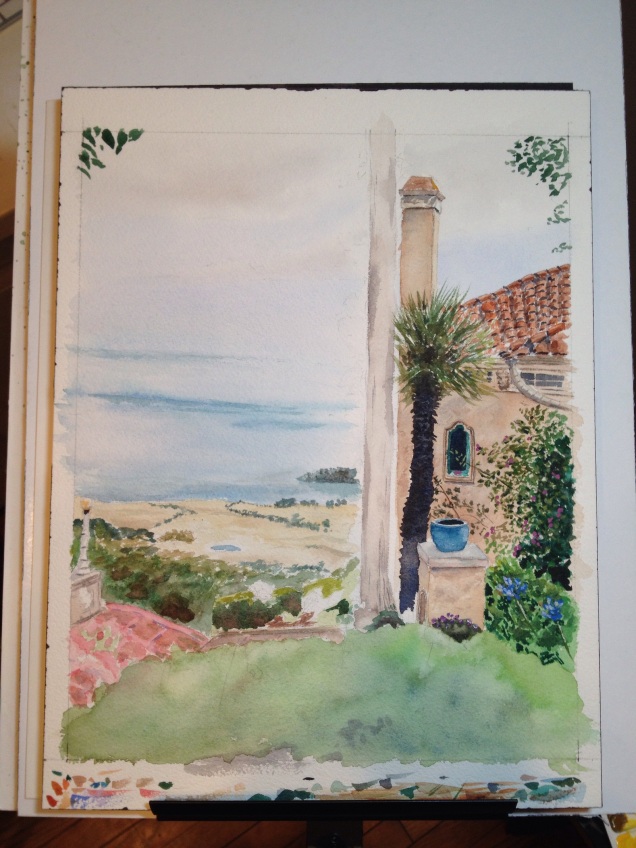 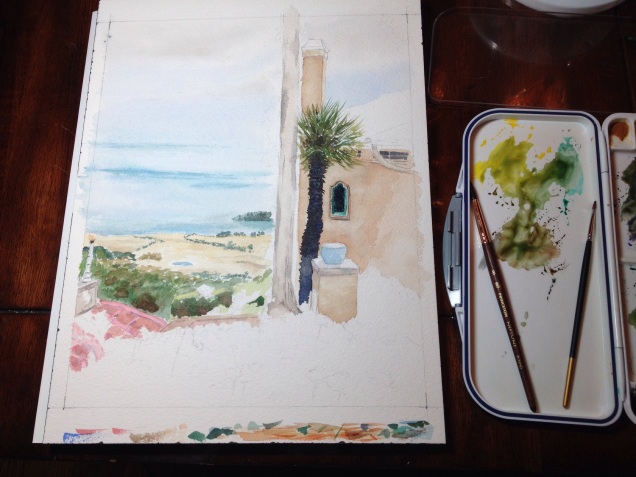 Over the past few days I have put in some more time on this one, both in thought and in action, as I’ve tried to sort out some problems that are new to me, such as painting a palm tree. I ended up doing a bunch of loose swipes with my soft brush with viridian, Sennelier yellow light, and burnt umber for the leaves, and doing some wet varied mix of ultramarine and burnt umber for the trunk. I will come in later with some opaque for some highlights.

As an aside, there’s something pretty satisfying about mixing the Sennelier paints with the soft brushes, maybe a little more so than the Maimeri Blu. They rewet easily (important for me because I don’t like to take time setting up, so I squeeze things out in advance and let them dry in my palette), and go onto the palette very richly. I think a lot of the fun with watercolor is moving paint around on the palette. I am looking forward to swapping in some more Sennelier in the earth pigments as I use up the Maimeri Blu.

I was also happy to get some depth and architectural detail with the window to make this feel more real. Now I can think better about how to proceed. The roof will present another challenge, as I want to combat my urge to try to make it right. I’d prefer to handle it quickly and impressionistically. Some more thought needs to go into that. I don’t want to get to that rougher style because I failed at doing it cleanly. I want to get there deliberately. Then again, that may not be the right place for it, and I should try to get it clean so the foliage seems wilder. This is another painting of experiments for me. 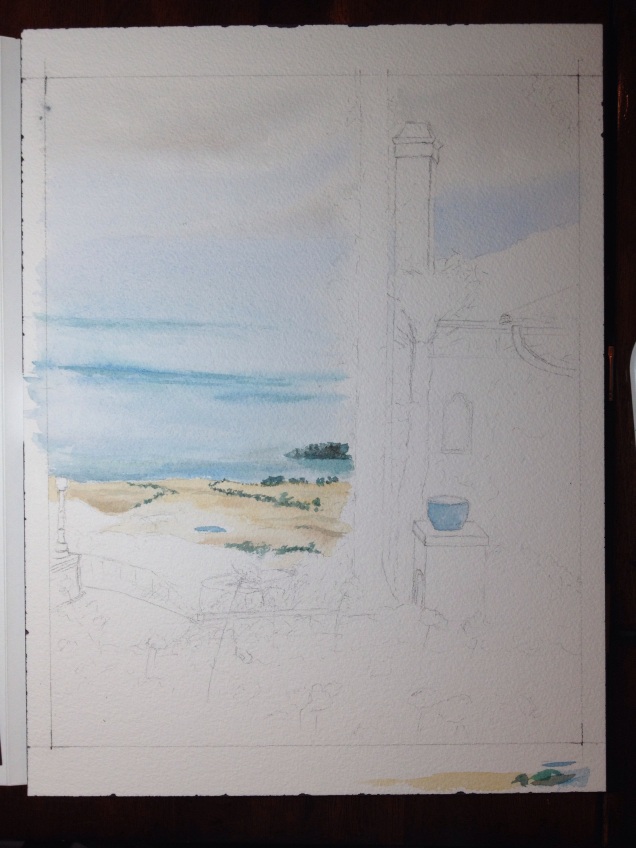 I drew this out a few days ago but haven’t had proper time to devote to it until now. This is one that I think should be handled more directly than some others I’ve done, and handled in fewer sessions–ideally one, but my lifestyle and my attention span won’t permit that, so at least I wanted to paint all the background at once–the sky, water, and land–all relatively wet so they recede and blend as compared to the more material and structural foreground. We’ll see when I’m done if what I did today will work as I was imagining it.

One thing that struck me about the view was how difficult it was to distinguish the sky from the ocean due to the haze. It created the strange sensation of singling out the castle as a distinct, special place–a castle in the sky–but not some hazy ethereal castle, rather this architectural floating ecosystem. I think a little of Hayao Miyazaki’s film Castle in the Sky.

For the sky I stuck with a simple very diluted cobalt blue, and for the clouds I mixed in some burnt sienna. In the ocean I added a little viridian to the cobalt blue, and then tied that to the foreground by using roughly the same color in the distant waves, the lake in the center left, and the pot on the right. Viridian will appear in a greyed-out form again on the window ledge, and link to the distance as well.

That’s all for now. Maybe I can go back to sleep before the kids wake up.

On our way up the coast one Route 1, we stopped at Hearst Castle. What a strange place. Beautifully maintained in many ways, but certainly beyond over the top. I can only imagine it in its heyday, with guests arriving by plane and out of place animals roaming the countryside. There must have always been subplots in every step, every interaction. There’s a Bronte tone to it, I think, even today, though that’s softened a bit by Alex Trebek’s voice giving the back story on the bus ride up the hill.

I have a few paintings I want to do based on our tour there. I want to bring out that tension between the manicured and the sublime, and give a sense of those imagined subplots. Here’s a concept sketch I did of one of the views. Maybe my notes are legible. Here again I will handle things roughly, especially in the foreground, and mix in some gouache to heighten the tension. 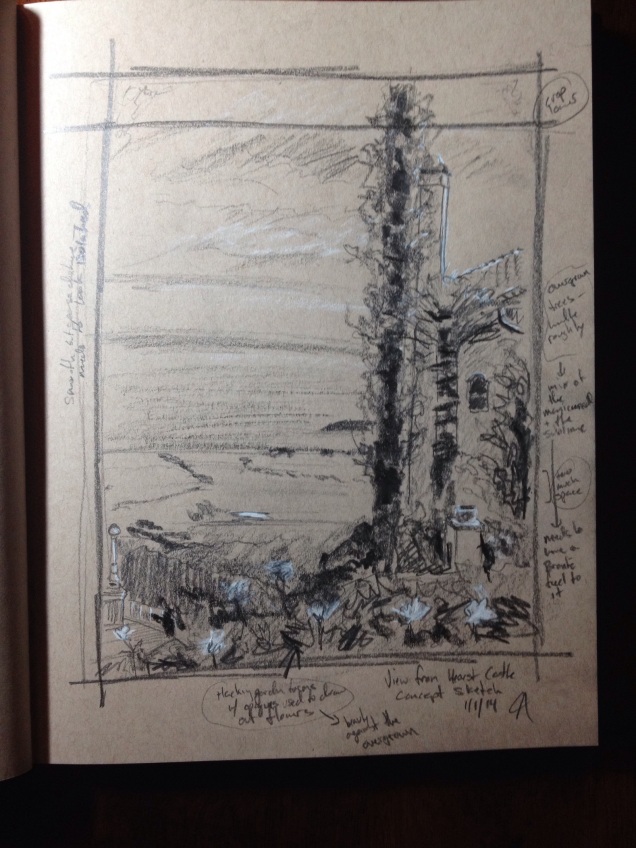