What is the role of people in non-portrait paintings? Scale? Narrative? After a very insightful comment posted on my last entry, I got to thinking about this topic.

The loneliness of Hopper’s figures was a key aspect of the mood in his paintings. The unpopulated paintings are very open for interpretation, either as outdoor still lifes, or arrangements of line, surface, and volume, or any number of things. When he adds people, what happens? His unpopulated paintings aren’t without evidence of human life–they never appear post-apocalyptic, for example, but what a difference a lone figure can make. There’s a new level of sadness conveyed, or perhaps not sadness but pregnant ambiguity.

I have three options regarding figures.

1. Add several figures in some form of interaction.
2. Remove all figures, and have an unpopulated building-scape.
3. Have a single figure, the man in the window, and remove the man on the bench.

The first option is inviting, full of life. Theres much to be made of a crowd, both in terms of potential drama, and in terms of composition. But in order for this to work, I might need to be a better painter than I am.

The second option is also interesting, but, thinking of my goal of conveying a sense of the fantastic, a space without a human to interrupt might be more easily viewed as without tension of the right sort. This isn’t a Wyeth piece where certain objects are imbued with so much meaning, drama, tension. I need a human to show that conflict of spatial identities that makes up the fantastic.

The third, for me, is the most interesting, the most full of mystery. Would could the lone figure, the shirtless sentry, be looking at? Theres no one else in the scene. What is he retreating from? What is going on in his mind? This is the key question. By putting a figure alone, all of the drama of the “scene” is mental. That mental state is informed by his environment, but his presence also interjects some value into the space.

As for the execution, I am trying to be looser with this one to showcase the humidity and the twilight and the the age. I have so far worked only with my quill. I am going to see how much I can do in this fashion. Here it is with some preliminary washes. 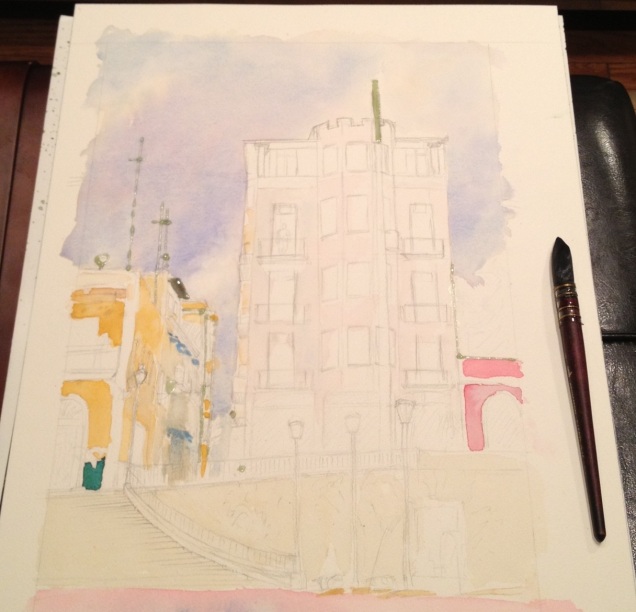 2 thoughts on “Twilight in Old San Juan: Some Thoughts on People in Paintings”