Speed and conciseness of style please us because they present the mind with a rush of ideas that are simultaneous, or follow each other so quickly they seem simultaneous, and set the mind afloat on such an abundance of thoughts or images or spiritual feelings…
– Giacomo Leopardi

If discoursing on a difficult problem were like carrying weights, when many horses can carry more sacks of grain than a single horse, I would agree that many discourses would do more than a single one; but discoursing is like coursing, not like carrying, and one Barbary courser can go faster than a hundred Frieslands.
– Galileo

I was thinking about Calvino’s essay on Quickness while biking this morning, in particular the quotes from Leopardi and Galileo. Calvino explains that the horse has long been a metaphor for speed of thought in literature. I suppose a road bike is a decent substitute. In both quotes above, it is important to note that the speed reflected is that of reasoning or writing, not speed of execution. They are not arguing for Kerouac-like binges. Much preparation goes into achieving the speed of thought. This is why Calvino likes the motto “festina lente,” or hurry slowly.

In order to achieve quickness on a bike, one must prepare one’s body. In order to achieve quickness of thought, one must prepare one’s mind. The same is true with any visual art, as my gestural sketch below shows. I executed it in about 30 seconds while holding up my bike. This is not an ideal way to go about things, but I wanted to see if I could achieve both quicknesses at once–in execution and in thought or expression. I think not yet, but it was fun regardless. This attempt, as others like it, will enable a better understanding and execution when it comes to painting, at least so I hope.

Watercolor is a medium that perfectly aligns with the festina lente motto in that patience is so important to producing a watercolor that reads like Galileo’s courser, or Leopardi’s style that sets the mind afloat. I think of this usually in terms of avoiding mud and making a watercolor light, so taking time between glazes, etc, but it also applies to the more apparently haphazard methods of painting, such as rapidly poured watercolor moved around with credit cards and other things, that seem so casual, so easy. This kind of painting quickly as performance, like racing a bike, can only happen effectively with patience in advance to learn the way the paint moves.

It has been interesting and refreshing rereading Calvino’s Six Memos in the context of painting rather than writing fiction. As I tried to do in writing, I need to remind myself again in painting: festina lente. 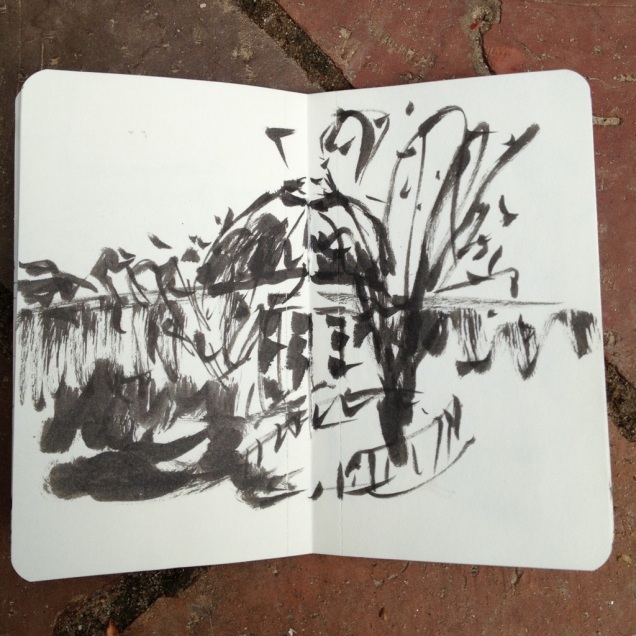 One thought on “Festina Lente: Cycling, Leopardi, and Galileo”